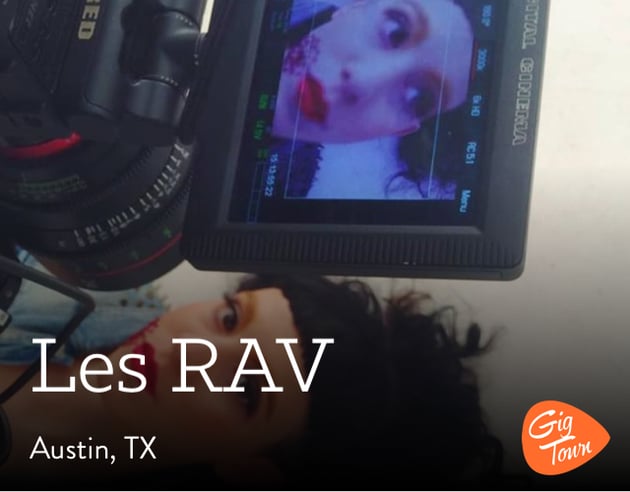 This week's Radio Roulette has taken us down to the land of Texas, by way of Austin based songwriter and creative, Les RAV.

The kind of music that Austin composer and atypical creative, Les RAV, offers to the world through her single, “Darkest,” might initially intimidate some. It's instrumental, orchestral and doesn't look to suck listeners in with a “hit 'em hard and fast” type of melodic hook. No, this song is one of steady development and gradual reveal – two concepts in music listening that fly in the face of what so much of interacting with music translates to today.

The inclination toward the less typical or obligatorily trendy makes more sense however, when one finds out that Les RAV – who is known off stage as Lauren Bruno – is not just a songwriter but also attended the Berklee College of Music; a music university known for encouraging budding musicians to think and create outside of the box.

“Darkest” embodies and combines the freeform of a mainstream artist, with the formality and poise of a traditional scholar. Absent any lyrics for nearly the whole first minute of the four and a half minute piece, “Darkest” presents listeners with a beautifully textured introduction consisting of piano and a string quartet. The writing is full of character; moving the music forward with a variety of note patterns and playing techniques, including pizzicato (plucking the strings) and tremolo (rapidly moving the bow back and forth on the same note, creating an almost “buzzing” kind of effect) on the part of the strings. Then bolstered by just the slightest modicum of overall reverb, the music almost feels like it belongs in the background of a Studio Ghibli film, a company known for its thrilling cinematic visuals but also for its equally memorable film scores.

Once the vocals finally kick in and the instrumentals pull back to serve as punctuators between sung notes, “Darkest” takes on a bit of a different feeling. Les RAV's long-held and fluidly sung lyrics (“But I don't need your romance.”) are minimally, if at all shaped with effects and the result is a mental transition from “film score” to “classic Broadway monologue number.” Les RAV isn't just singing about a story with “Darkest” but applies her unusual timbre of voice (it's hard not to think of some dramatic film noir) to sing her story to the listener – in much the fashion of a character singing to an audience in a musical.

Serving as a first helping of her musical aesthetic, “Darkest” highlights a long road of potential for Les RAV. The song itself feels like just an introduction; as if it were meant to be the first in a line of mildly avant-garde compositions to tell a deeper narrative across many situations. Summing it up plainly: “Darkest” prompts the wanting and needing of more.

“Darkest” is its own awesome entity, as a standalone single. It's available now through Bandcamp!

Check out more on Les RAV through Facebook and hear “Darkest” spinning on GigTown Radio! If you dig the track, be sure to find Les RAV in GigTown to book her and or catch her next show!