It's the end of the long Memorial Day weekend but the beginning of a short work week. You know what that means? Starting off the week with Radio Roulette right away! Newest up on the roulette roster are the sounds of Seattle's Heels To The Hardwood!

Heels To The Hardwood

When thinking of the uppermost northwest United States – namely Washington state and its largest city Seattle – there's more than likely to be at least a few people who wouldn't necessarily default to thinking of Americana and soul when pondering the corner state's most noted musical vibe. Nevertheless, bands like the descriptively named Heels To The Hardwood, stand as an appealing example of such styles.

The five piece band of David John Wellnitz (Singer/Songwriter/Guitar) Patrick Files (Lead Guitar/Backing Vocals), Kevin Stiles (Multi-Instrumentalist), Jeff DeMelle (Bass) and Jesse Lee Honor (Drums) really melds their chosen ribbons of Americana, soul, blues, and rock, exceptionally well. There's quite a bit to put together in that list of genres and “Pocket Knife” manages to pull off the feat without leaving the songs feeling like a pandering mess with an identity crisis. 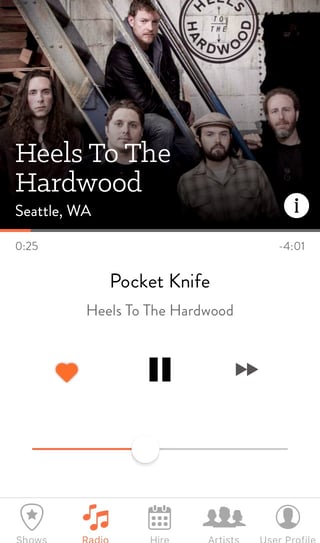 One of 11 tracks on the band's 2014 debut full length, the roughly four and a half minute heavy hitter of a song actually starts listeners leaning toward the soulful end of the spectrum over the traditional Americana sound, which feels more included once Wellnitz's slightly twanged voice kicks in about 30 seconds past. One might dare to even say the instrumental introduction borders on funk territory with the wah-wah tone of the guitar, style of strumming in the rhythm, and chosen hook of notes.

The gradual additional of organ, cymbal / hi-hat focused percussion, and then lap steel, creates a steady, controlled swirling of southern songwriting components, delivered with a very bluesy style of execution. The four note guitar hook chugs along through the song's verses, providing a somewhat militant backbone among the rest of the elements, which are otherwise very free flowing and apt to inspire spontaneous, long running, breakdown jams. (Performed live, this very scenario would not be hard to envision.) There are plenty of places free of vocals in “Pocket Knife” that let Heels To The Hardwood's atypical arrangement stand out, adding yet another piece of encouragement toward boundless improvisations and non-replicable live experiences.

The song is intricately layered and holds up confidently. If there's any place where the group's musical confidence perhaps could use a little extra support, it's back in the vocals. Wellnitz's voice itself causes no qualms but pointed articulation of the lyrics isn't always put at the forefront and thus most words run together. This bleeding approach works well for the instruments and the flow of the song but transferring that stylization over to the vocals could lead to more listener frustration than intrigue. This particular character of note is, of course, a matter of personal listening preference, as it's no different than one guitarist preferring lots of reverb and another liking a clean tone. All in all, Heels To The Hardwood talk a very diverse musical game but a song like "Pocket Knife" shows the group can undeniably back up their claims.

“Pocket Knife” is found on Heels To The Hardwood's eponymous full length and is available for download or hardcopy purchase through cdBaby and iTunes!